“More Than a Landmark”

The tall white spire of the Church in Aurora rises prominently over the center of the city catching the attention of all who pass by.

The church sets upon a gentle rise and early in its history shared that prominent place with the town hall and the central school.  The early settlers to Aurora brought with them the family Bible and a books of psalms and hymns.  They also brought a deep spirit and devotion to their faith. They believed that what they were doing was part of “God’s hand.”

The doors to Aurora’s first church were opened to its congregation in 1824. The church was first organized in 1809 by the few families living in Aurora. Twelve men and women met in the home of John Singletary and established what would become the Congregational Church in Aurora.  As membership in the congregation grew so did the desire for a church home.

In 1816, John Seward, the congregation’s first full time minister, believed that it was time for the congregation to have a permanent home. He urged his congregation with a “firm determination to build a church, build it large, and build it for all time.” In exchange for his right to reserve “his pew in the Presbyterian meeting house” Samuel Forward, who owned Lot 18 in the center of the village, offered the site for the location of the church. After some debate over the size of the structure the members approved Seward’s call for a large church.

The congregation approved a budget of $7000. Subscriptions to cover construction expenses were solicited from the congregation. Very little was given in cash with most contributions being made in trade. According to member John Gould, “Men gave lumber, gave shingles, gave labor, and all gave to pay the two carvers…who adorned the interior. It was a story of consecrated service and heroic self-sacrifice.”

Chauncey Eggletson, Robert Bissell, and Brainard Spencer were appointed to serve as the building committee to supervise the construction.  Local craftsman were hired to make enough bricks to construct a meeting house forty-three feet wide and fifty-two feet long with an exterior wall height of twenty feet. They were directed to build a “steeple fifty feet square and as high as shall be thought proper.” The brick kiln was located near the “burying ground” adjacent to the location of the church’s foundation. In the early spring of 1818 volunteers commenced to fill brick molds by hand. Exceptionally wet weather hampered the operation making it difficult to dry the brick and operate the kiln. As a result only a portion of the church walls 10’ high was erected during the first year of construction. The walls were finished and the roof completed in the spring of 1819. The building committee entered into a $1500 contract with Robert Carver to complete the finish woodwork on the church.

Work on the church was suspended for nearly a year when the building committee ran into difficulty financing the project. To raise additional funds the committee decided to have a public sale of pews. The sale was a great success with nearly every pew being sold. General Eggleston paid three hundred dollars for a pew in the front row. The lowest price bid was twenty-five dollars. Almost every church family purchased a pew bringing in more than enough in “stock and trade.”

Final work on the construction of the church was not completed until 1824. On the day of the dedication of the church an oversight by church officials caused another temporary financial crisis. In the early 1800’s it was customary to give special seating and recognition to the “boss carpenter” and his assistant during the dedication ceremony. At an appropriate time in the service the preacher was to draw attention to the special guest and praise them for their work. Carver was forgotten. Incensed over the slight, Carver demanded that the remaining portion of his contract be paid in cash instead of goods. While the church elders scrambled to raise the needed cash, Carter finally relented and accepted payment in cash and goods.

Unfortunately there are no known surviving pictures or drawings of the “Old Brick Church.” Today, there are only a few written descriptions of what that beautiful and majestic “Old Brick Church.” In all of the existing historical data there is no mention made as to who was the architect of the “Old Brick Church,” nor how the early church fathers came up with the original design and the plans. There is no doubt that the early pioneers brought with them the vivid memories of their former New England church homes. One can only speculate as to how the vision of the church became a reality.

The “Old Brick Church” was a magnificent structure which was the home of the congregation until it was replaced by the current wooden structure. According to one of the early pioneers of Aurora, John Gould, the exterior walls were made of “flaming red brick.” Natural light flooded the church from its fifty colonial styled windows. Two rows of windows distinguished the sides of the church. The ground level row was “curtainless, unadorned windows, thick with 7×9 glass.” The second floor row allowed light into the galleries. An additional twelve “green blinded” windows could be found in the belfry. The brick bell tower extended upward for some height and was capped with a wooden white spire.  A white picket fence marked where the red brick and spire met. In 1825, a bell was added to the belfry at a cost of $300.

Members of the congregation entered through the church’s front doors into a tower vestibule that was flanked by two sets of stairs that led to the galleries above. High backed pew boxes occupied the main floor which was separated by a wide center aisle and two smaller side aisles. The pews were accessed through doors which opened into the aisle. Seats ran around the entire interior of the pew box. John Gould recounted how as a little boy….”as I stood on the seat I could see only fairly well over the top.” Since the church did not have central heating foot stoves were used by those in attendance to keep their pew boxes warm.

In the front center of the church there was a two-story pulpit. It sat atop several elaborate pillars and was reached by climbing sixteen steps. Galleries wrapped around three sides of the church and were supported by white columns. The staircases leading to the galleries emptied into a large meeting room on the second floor that was used for “consultations” by the choir between hymns. The galleries contained three rows of seats which were on many occasions occupied by the entire choir and orchestra.

By 1850, serious deterioration in the church’s structure resulted in significant “repairs.” Because the exterior church walls were showing signs of weakness the galleries were removed with the ceiling being lowered six feet. The columns that had supported the galleries remained in place and were used to support the new ceiling along with “two long lines of stove pipe.” At one point along the path of the pipe a “two quart tin pail” was hung to catch leakage from the creosote that accumulated. The colonial styled pew boxes were removed and “modern” slip seats were installed.  The two side aisles were retained while the wide center aisle was filled in with pews. The pulpit was lowered a “story and half.” The renovated interior was described as being a “quaint colonial affair…rich in panels and moldings and was always kept painted white.”

The “Old Brick Church” continued to have structural problems despite the extensive repairs. One inch cracks through which daylight could be seen had developed in the walls. The cracks were the result of the “sinking of some portions of the underpinning” that had supported the exterior walls. It was obvious to many that the church was unsafe to use. The church elders determined that it was time for a new church.

The final worship service in the “Old Brick Church” was conducted on June 18, 1871. According to the Reverend James H. McKee in his History of the Congregational Church of Aurora, “It was not without tears that those who had labored in the building of this house, and with which so many hallowed associations were connected, saw its walls disappear, and a great heart-sob went out as the bell-tower came crashing down.”

The Church Elders had already made plans for building a new structure upon the foundation of the “Old Brick Church.” Funds again were pledged by the members of the congregation as well as pledges of materials and labor. Construction of the new church proceeded quickly and on January 14, 1872 was dedicated. Unlike the original sanctuary, the Trustees provided for continual maintenance and repairs. Over the years various additions have been added allowing for the 1872 Church to stand prominently in the center of town.

In 1913 the Church join into a “federation” with the Disciples of Christ Church which was located diagonally across the street in what is now the parking lot to the Aurora Memorial Library. The arrangement provided for both churches to share in the use of the church building, yet allowed for cooperation in the financial upkeep of the church. The combined churches existed as the Federated Church in Aurora until 1933. During its 30-year existence, members could have joined either the Congregational Church or the Disciples based on their denominational preferences, or the Federated Church without declaring a choice. Once again, the two churches were experiencing financial and membership issues. To resolve the issues, it was decided by church officials to end the federation and to unite as one interdenominational church, The Church in Aurora. 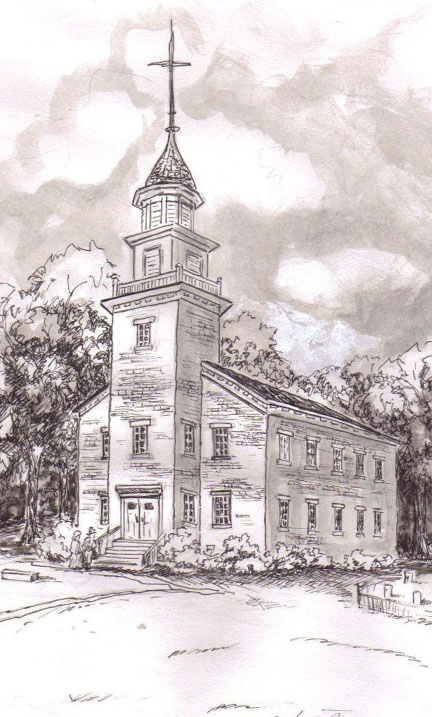 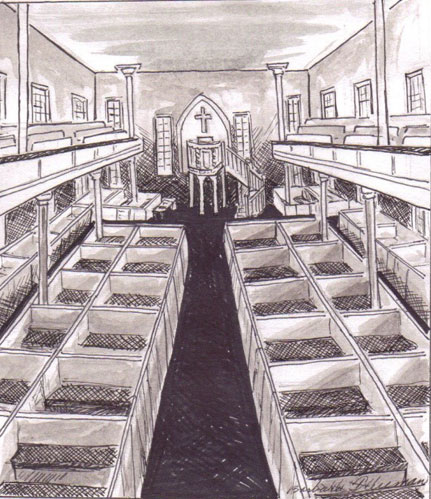 In the front center of the “Old Brick Church” there was a two-story pulpit. It sat atop several elaborate pillars and was reached by climbing sixteen steps. 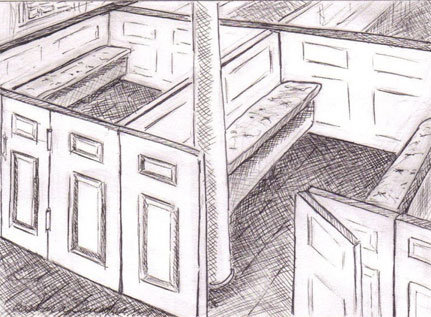 High backed pew boxes occupied the main floor which was separated by a wide center aisle and two smaller side aisles. The pews were accessed through doors which opened into the aisle. Seats ran around the entire interior of the pew box.